WICHITA, Kansas—A mixed-race Kansas couple expecting their third child has filed a complaint with the Kansas Health Commissioner in order to be included in a so-called “free white baby” maternity promotion taking place in some Kansas hospitals.

The married couple, Trevor Brown and Véronique Blanc-Brown, filed their complaint after they were recently, inadvertently, made aware the promotional program existed at their local hospital, where they had already delivered two babies within the last four years.

The Brown family believes they are being denied their lawful rights to the program benefits because “our babies are white too,” according to Ms. Blanc-Brown, a history professor at Wichita State University who is of French Canadian Quebecker ancestry.

The free white baby promotion is part of a not-well-advertised program created in 2011, when the Republican-dominated, Christian-based Kansas legislature passed an initiative that declared a “white fertility crisis” and ordered Kansas health officials to “immediately and drastically raise the state white birth rate.”

Under the initiative, the Kansas Health Commissioner created the Affordable White Babies for Kansas program—available only in rural Kansas counties—that features a 5-baby plan with a tiered discount structure for prenatal, labor/delivery services, and postpartum care costs for the first four white babies and a no cost, “free gift from God” fifth white baby. 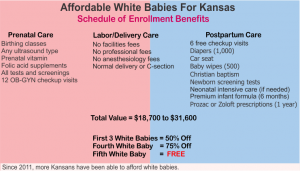 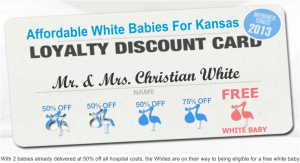 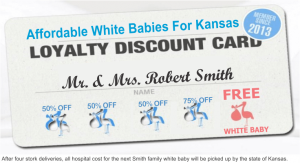 Mixed-Race Babies Are White Too

In an interview with the couple via smartphone from their Derby, Kansas, home—just south of Wichita—Ms. Blanc-Brown said she found out about the program by accident earlier this year during a routine prenatal checkup.

“Apparently, on that visit I was seen by a nurse new to that hospital, and maybe she couldn’t tell from the ultrasound that I was having a brown baby, but she asked which baby it was in the free white baby program,” Ms. Blanc-Brown recalled.

“I blew my top, was terribly horrified. I never would’ve thought such a thing could exist right now, here at this time in post-racial America.”

“Then [her husband] told me about that old Ku Klux Klan, white supremacist, make-America-great-again rule that one drop of Negro blood makes the baby a black baby. And that just got me even more upset because we have brown babies, not black babies.”

She also lamented having to take the case “all the way up to the state level“ but said they had no choice because the Derby hospital administrators were acting like “a bunch of MAGA neo-Nazis about it.”

“It should’ve been very simple, very easy for the hospital to grasp that since I’m white our babies naturally inherit my white heritage too,” Ms. Blanc-Brown explained. “I just still don’t understand how people can’t see the obviousness of that. I guess some people are alt-ignorant also.”

Mr. Brown, a dark-skinned Jamaican American, also a university professor, said he wasn’t surprised by the existence of the free white baby program in “blood-red, Christian, Republican Kansas” but was still upset about how much they had paid for their first two babies, 2-year-old Geneviève Blanc-Brown and 3-year-old Étienne Blanc-Brown.

“We paid full price for those babies, were charged for everything, so they owe us a lot of money, something like over $30,000. That’s money we could’ve used and can still use now. And I’m going to make sure we get a refund for both of them.”

Ms. Blanc-Brown said she is committed to ensuring the Browns’ babies are afforded all the rightful privileges of their heritage.

“My beautiful, little brown babies are also white,” she declared. “And we should’ve been in that program, and somebody should’ve told us about it without having to find out about it on the sly, but I’m going to make sure my babies enjoy all the white privilege they’re entitled to.”

In reply to a Freedom of Information Act request, the Kansas Health Commissioner acknowledged the existence of the program but did not offer details beyond providing the examples of Affordable White Babies For Kansas registration cards in this report.