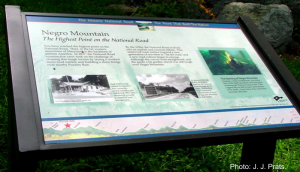 The dispute over the name’s origination has been an over 30-year flash point in Maryland politics. The traditionally heavily Democratic-controlled Maryland legislature has unsuccessfully tried to change the name several times.

In a telephone interview, Roger McSwain, professor of Maryland history and antiquities at Garrett College in McHenry, said the names associated with the mountain range have “echoed what colored folks were called at a given period in America history.”

Mr. McSwain said: “Originally, way back in the late 1700s, it was known as Ethiopian Mountain. Then going forward chronologically, it was known locally as Slave Mountain, Colored Boy Mountain, Nigger Mountain, Afro-American Mountain. But it seems to have gotten stuck on Negro since around, I’d say, about 1966.”

Speaking with reporters after the ceremony, Garrett County commissioner Robert Hineman (R) said the renaming was unnecessary. “We don’t have an issue with that name, he said. “We don’t have any Negroes or blacks or African Americans out here.”

“With all the stupidity going on over there in Baltimore, why he’s coming out here outside-agitating in a states’ rights issue stinks of political correctness on steroids,” the commissioner added. “We don’t have those kinds of problems out here.”

After the ceremony, Mr. Obama told reporters he understood the brouhaha over the name, but he knows he’s doing the right thing. “I’m updating history, not changing it,” he said.

“By now, at least since 2009, everyone should know we’re a postracial America, so these kinds of certainly archaic relics just have to move forward.”