Ms. Clinton’s stranglehold on black and African-American voters exceeded numbers then-Senator Barack Obama won in the 2008 Democratic presidential primaries. She won over 90% in Mississippi, Alabama, and Louisiana; 87% in South Carolina; and 80% in Florida, North Carolina, and Georgia.

A new Pugh Research Center survey conducted March 26 to 31 on landlines and cellphones among a regional sample of over 25,000 blacks and African Americans who voted in primaries in seven Deep South states—Mississippi, Louisiana, Tennessee, Georgia, Arkansas, Alabama, South Carolina—details negative opinions voters held about Mr. Sanders that informed their decision to vote for Ms. Clinton.


Overall, 99.8% of respondents said they had very little information about Mr. Sanders before voting and cited the absence of media coverage of his campaign. Most could not recall hearing or reading news accounts in their local media about Mr. Sanders’ campaign.

Many respondents said what scant knowledge they had of Mr. Sanders originated in informal communication sources such as rumor, gossip, grapevine, and conversation in barbershops and beauty salons.

The respondents’ negative views of Mr. Sanders concentrated on mistrust in three areas—cultural, religious, and political.

The most widely expressed negative factor was a belief that Mr. Sanders is not a Christian. 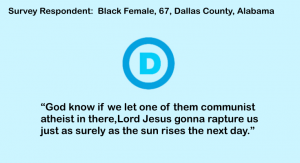 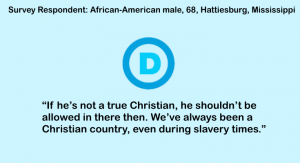 Many respondents held views that Mr. Sanders is a stealth candidate, believing he is a booby trap planted by Republicans to derail Ms. Clinton’s candidacy. 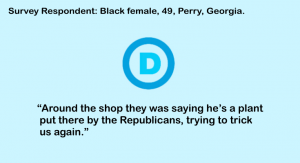 Concerns regarding racial sensitivity were expressed by a great number of respondents—82% indicated some variation that Mr. Sanders held negative opinions of blacks and African Americans or “didn’t like being around us.” 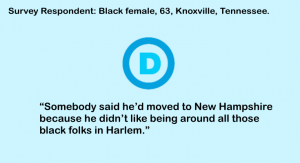 Overall, most respondents expressed blinding, fawning loyalty to Ms. Clinton through the “took good care of us” legacy of her husband, former-President Bill Clinton. 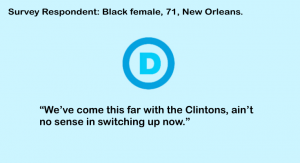 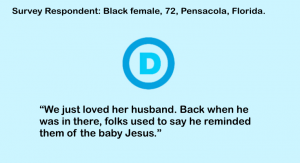 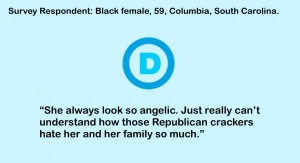 Although many of the upcoming Democratic presidential primaries are in states with smaller black and African-American populations than the Deep South states, for Mr. Sanders to be successful in seizing the nomination from Mr. Clinton improving his image with these two ethnic groups could be crucial to win those states.