“She’s being given great consideration and deservedly so become outside of Sean Hannity, Laura Ingraham, Ann Coulter, and Breitbart she was the most-effective messenger we had during the campaign,” Mr. Giuliani said yesterday during an appearance on Stand in the Gap Today, a daily radio program on the American Pastors Network that instructs Christians on how to think about cultural and moral issues. 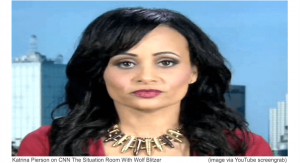 The former New York City mayor told guest host Sam Rohrer, president of the American Pastors Network, the transition committee would not “be kneeling down to political correctness” regarding Ms. Pierson’s identity if she would eventually be appointed to the position.

“Look, we’re not going to play racist name games like the Left does with first black and first African-American this and that and the other. From what I know about her family, her daddy is black and her momma’s white. So might we use biracial or colored? We’ll see, but we intend to stop the PC madness that has infected our politics and our country for the last eight years.”

We’re not going to play racist name games like the Left does with first black and first African-American this and that…So might we use biracial or colored? We’ll see.

“Clearly, she’s not pure European American, although she has some facial features, like her nose, that could be considered European, but for right now we’re just sticking with she’s a minority,” he added. “That’s what we do know to be really true.”

“Even with very little instructions and directions she was effective and passionate in delivering the president’s message, seeming to almost be reading his mind. In fact, we jokingly called her the Trump whisperer.”

During the 2016 presidential campaign, Ms. Pierson was accused on many occasions of providing less-than-truthful and honest information during media interviews.

The former federal prosecutor agreed with Mr. Rohrer that if Ms. Pierson were appointed it would be “proof of God answering prayer.”

“Indeed, that would be God answering the prayer of His people and giving Christians a window of opportunity to save this nation and advance this nation in His vision,” said Mr. Giuliani.