At 7 a.m., police officers were called to the 3200 block of St. Paul Street—in the eclectic, bohemian Charles Village neighborhood—to the location of a Starbucks coffee house to investigate a reported robbery involving high-tech devices.

Gaofei Yu and Pehong Wang, Chinese nationals who live in a residence hall at the nearby Johns Hopkins Homewood Campus, told officers they were robbed “of our Gita robot with all our stuff in it” before reaching the Starbucks.

Mr. Yu told the investigating officers “we got really busy with our iPhone on Weibo [a popular Facebook-like social media platform in China] and didn’t notice Gita no longer behind us.”

Gita Eliminates the Burden of Carrying Stuff By Hand


An autonomous, self-propelled, self-navigating, personal cargo-carrying robot that follows behind a user, Gita, a ball-shaped device rising just over 2-feet tall—developed by Piaggio Fast Forward, a brand of the Italy-based Piaggio Group—is designed for the human who has lot of personal stuff to carry around, and it can carry a lot of stuff. 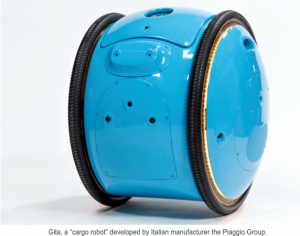 According to TechCrunch, “the Gita can carry up to 40 pounds at a time and has a maximum speed of 22 miles per hour, so it can keep up with a person on foot or riding a bike.”


Mr. Wang told the officers he’s “heavy into gadgets” and tries to be the first in line for new high-tech electronic inventions, so he purchased the robot “when it first came out this summer.”

Mr. Yu told the investigators he was used to getting strange stares and comments about his robot but “thought nothing about it at all till this morning.” 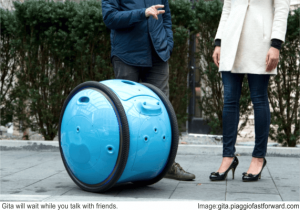 Strange Encounter on the Mean Streets of Baltimore

Mr. Wang recounted to the officers that as the two students walked south on North Charles Street near East 34th Street a large black SUV carrying “three light-brown-skinned black men, or they could’ve been African Americans, we couldn’t really tell which, about medium height, all wearing black hoodies, black caps, black shirts” pulled over to the curb.

“And one leaned out the window and goes like ‘yo, bros, y’all better look out behind you, there’s an alien or some kind of thing tracking you down,’” Mr. Wang explained.

Mr. Yu added that they told the men it was their robot and they had no worries.

“They still looked kind of concerned about us, but we told them ‘we got this, brothers,’ and they left, and we got back on Weibo,’” Mr. Yu explained to the officers.

About four blocks later, after arriving at the Starbucks, they realized their loss.

“When we looked back, we didn’t see Gita, she was gone, so we call police and told them about those guys,” Mr. Yu told the officers.

Gita Users Can Carry Around Tons of Personal Stuff


Both victims reported the loss of many personal items that were stored inside the Gitas.

Mr. Yu couldn’t recall precisely all the items inside his Gita, but he gave police officers a tentative list.


Annis Minor-DeMinimus reports on technology and crime in the Mid-Atlantic region.

Previous Post
Billionaires Are People Too
Next Post
Trump Administration Female Staffers Not Allowed To Self-Identify As Ms.