In the letter, the FFRF complains that the skyward-pointing-thank-you-God (SPTYG) religious expression is a provocation against nonreligious football fans and creates hostile environments where secular fans are intimidated and thus cannot fully enjoy NFL games, whether viewed live or televised.

The letter commands Mr. Goodell to enact new player discipline rules that would impose a harsh unsportsmanlike conduct penalty on any player who engages in such “evangelical football proselytizing.”

The letter’s demands: “This CEASE AND DESIST ORDER is to inform you that the intimidating and aggressive religious activities of certain NFL players directed at nonreligious football fans have become unbearable. Such religious expressions and behaviors in the public square are completely unacceptable, and the secular community will no longer tolerate them in any way, shape, or form. This letter is to demand that such expression of religion belief by any and all NFL players must CEASE AND DESIST immediately.”

In a telephone interview from the group’s headquarters in Madison, Wisconsin, FFRF spokesman Christian Wright said the group calls for action this NFL season because it has been receiving increasing complaints from secular football fans.

“Most years we get just a few, but last year, we received an ungodly number of complaints, hundreds of thousands, possibly millions,” Mr. Wright explained.

“Millions of atheists love football too, and we’re offended and intimidated when we see players aggressively pointing at the top of stadiums to acknowledge their God. And this religious expression is not a football play, not relevant to the game, so we’re demanding it be exorcised from the public square this season, now.”

Mr. Wright said the letter was sent as a last resort because their outreach to several religious groups had been unsuccessful.

“We had been working with several preacher organizations from different denominations trying to get them to declare this SPTYG rite a blasphemy, you know, and issue something like a fatwah, if you will. But in the end, no group would join in a protest. So we had no choice but to seek a legal remedy.”

The mission of the FFRF is to ensure complete separation of church functions and governmental activities. The group’s primary strategy involves filing lawsuits against public organizations that promote or engage in religious activities in public spaces.

And over many years and hundreds of lawsuits, the FFRF has been very successful at curtailing unconstitutional religious behavior by local governments and public institutions.

So far in 2016, the FFRF has scored many legal victories, including against a Kentucky county clerk, a Mississippi public school, and a Kansas police department. 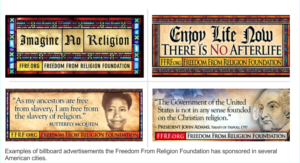 Mr. Wright said the FFRF also has concerns that ethnic minority NFL players are being coerced to perform SPTYG religious acts. The organization recently completed and published an analysis of SPTYG religious acts that occurred during the 2015-2016 NFL season. 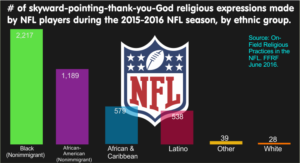 “We’re wondering if they’re being forced into these acts, if perhaps there’s some sort of modern-day slavery activity the NFL is engaged in,” Mr. Wright speculated.

“In fact, now players point to the sky more than they dance. We would prefer to see them dance more.”

The FFRF did not set a time frame for stoppage of the religious acts, but Mr. Wright said they are “praying that Mr. Goodell would take action during the upcoming NFL season,” which starts next week.

The FFRF will pursue further legal action if Mr. Goodell takes no action.

A spokesperson, via telephone from NFL headquarters in New York City, would not verify if they had received the letter from the FFRF.