According to the strategist, the #NeverTrump coalition will promote write-in candidates in Deep South states, hoping to ignite a backfire to keep the deeply conservative region Republican red.

“He isn’t corrupt and he isn’t crazy. But it seems no one has heard of him other than pencil-pushers in two or three office buildings in D.C.,” Mr. Pollman told the reporters.

He isn’t corrupt and he isn’t crazy. But it seems no one has heard of him other than pencil-pushers in two or three office buildings in D.C.

Mr. Pollman said initial results of the survey showed a flicker of hope that Mr. McMullin could do well in some Deep South states. However, later survey analysis exposed an overlooked, critical measurement error. 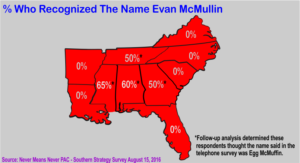 “There was genuine widespread confusion down there about that name,” explained Mr. Pollman.

“It seems the words Evan McMullin do not translate smoothly to the Southern ear. A lot of them thought the pollsters were referring to a McDonald’s breakfast treat. That’s when concern grew that we were possibly in jeopardy of losing Dixie to that New York carpetbagger.”

…words Evan McMullin do not translate smoothly to the Southern ear…thought the pollsters were referring to a McDonald’s breakfast treat.

“At best, he’ll probably be able to get on the ballot in maybe two or three states. So we feel write-in candidates are the most viable option left if we’re going to preserve conservative Republican orthodoxy in the Confederacy,” Mr. Pollman speculated.

Mr. Pollman said #NeverTrump Republicans would be relying on later filing dates for write-in candidates in most Deep South states.

“We’re going to recruit the most popular person in every state. No matter the profession—athletes, preachers, reality TV stars—we think they will have an easier time slowing down Trump, no disrespect meant to Evans [Evan].” 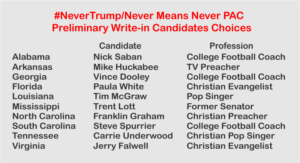 Mr. Pollman acknowledged the chances of Mr. McMullin or a write-in candidate defeating Mr. Trump or Democratic presidential nominee Hillary Clinton in any state are slim, but he said the #NeverTrump movement’s ulterior motive is to “save the moral core fiber of modern Republicanism.”

“In any given election, anything can happen. Given an option, in the privacy of the ballot box people will vote their conscience. Nevertheless, the future of our party relies heavily on keeping the south solid Republican.”