BRUSSELS—The European Union (EU) took a pause from its seemingly never-ending—over two decades—string of antitrust and anticompetitive investigations and rulings against U.S.-based technology firms to issue a rare anticultural ruling against Google that would force the multinational corporation to alter the Google Search engine homepage for its France operations.

In the ruling issued last week, the European Union Culture Commission—the body that governs education, language, sports, and culture—approved a petition filed by the French Cultural Commission and declared “google” culturally and linguistic inappropriate for usage in the French language.

The commission further ruled that the technology behemoth would have to choose an appropriate French word to describe its Internet search engine.

Established in 1635, Académie française maintains and enforces the linguistic purity of the French language through issuance of rules on grammar, usage, and lexicon. Specifically, it focuses on preventing the anglicization of the language.

In recent years, Académie française has been criticized for “language Nazis” behavior because it sought to ban usage of many worldwide-accepted English language Internet and information technology terms, particularly its controversial 2013 banishment of hashtag.

In 2014, Académie française issued a decree that French speakers must use a form of rechercher (to search) instead of google, which in turn generated the EU petition from the French Cultural Commission.

To Google or To Rechercher

The EU ruling will bring a commercial impact to the 2014 Académie française mandate. As part of its ruling, the European Commission granted provisional approved of a linguistic-appropriate, redesigned Google Search homepage proposed by the French Cultural Commission. 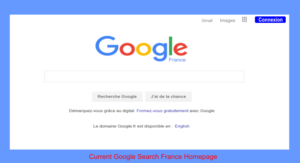 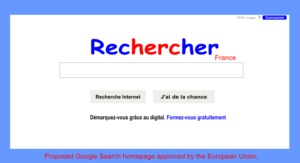 In an interview with government-owned television news network France 24, Tibor Navracsics, EU Commissioner for Culture, defended the ruling and swatted aside criticism that the EU harbors anti-American biases toward U.S. technology firms.

“What bias? What grudges? We don’t understand why the Americans keep saying such things,” the Hungarian executive said.

“It’s seems pretty clear to us google is not a French word. In fact we couldn’t decide if it’s a true English word or not. We have responsibility to safeguard and protect European cultures and values. French companies have to use English terminology in the States, so it’s all fair play.”

Google has until June 2018 to appeal the EU ruling, which would go into effect in late 2018. The French national government has signaled the EU that it intends to enforce the ruling.