WASHINGTON, District of Columbia—On June 4, over 25,000 nonreligious Americans gathered at the Lincoln Memorial in the Nation’s Capital for Reason Rally 2016, a gathering aimed to show the growing political presence and power of nonreligious voters.

Organizers billed the event as “a celebration of fact-driven public policy, the value of critical thinking, and the voting power of secular Americans.”

With the presence of such a large group of secular voters on the National Mall, the Pugh Research Center for Religion and Political Life—a Baltimore-based, nonpartisan, progressive think tank—in association with The Colored Folks Times-Dispatch took the opportunity to conducted a poll to assess the political leanings of nonreligious Americans.

Pollsters canvassed the grounds of the Lincoln Memorial during Reason Rally 2016 and asked over 18,000 attendees their choice for the 2016 presidential election.

Atheism of Many Flavors

Although rally organizers also promoted the event as the “largest gathering of freethinkers in the U.S.,” all respondents polled self-identified as atheists. Respondents also qualified their degree or level of atheism. 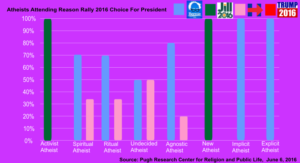 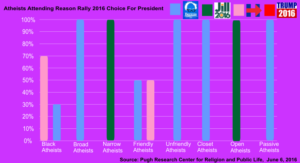 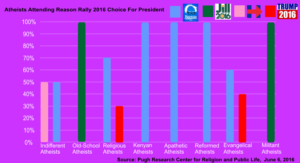 Poll results did not reveal a strong statistical correlation between the level of atheism and candidate preference, but a trend suggested that far-left-leaning atheists supported socialist-leaning candidates, as indicated in comments made by some respondents. 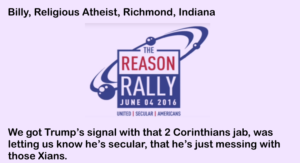 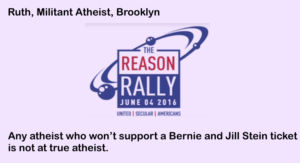 The first Reason Rally was held in 2012, and the organizers plan to hold the event every four years, to coincide with presidential election years.

Rally organizers conceded that atheists made up most of the huge gathering, but they hope to attract greater numbers of other types of secular Americans—such as humanists, agnostics, nontheist, nones, antitheists—at Reason Rally 2020.